This wiki's URL has been migrated to the primary fandom.com domain.Read more here

In googology, it is the third hyper operator. When repeated, it forms tetration.

In Multiplication, It is:

In Addition, It is: 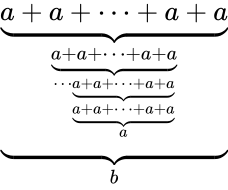 For a real number \(a\) and a non-negative integer \(b\), exponentiation has the following definition:

More precisely, it is defined in the following recursive way:

Similarly, the exponentiation is extended to elements in other complete topological rings such as complex numbers, \(p\)-adic numbers, and matrices with appropriate coefficients. This is a special property of exponentiation, and few analogues are known for hyper operators. At least, the complex extension of tetration is much more difficult than exponentiation.

The following are identities of exponentiation:

The following are some useful properties in manipulating exponents:

Here variables in each equality are real numbers such that both hand sides make sense. For example, in the first equiality, \(a\) should be non-zero, and should be positive unless \(b\) is an integer.

Repeated exponentiation is solved from right to left. For example, abcd = a(b(cd)).

If the exponentiation is with other operators in the math sentences, the ^ will be solved first like a*b^c = a*(b^c).

Two important rules of calculus are the Power Rules of Differentiation and Integration:

Here \(n\) is a real number, and satisfies \(n \neq -1\) in the second equality. The domain of the functions in the right hand sides depends on the value of \(n\).

The exponential function \(a^b\) can be represented: