Using Up-arrow notation, it is defined as the 64th term of the following sequence:

Graham's number arose out of the following unsolved problem in Ramsey theory:

Let N* be the smallest dimension n of a hypercube such that if the lines joining all pairs of corners are two-colored for any n ≥ N*, a complete graph K4 of one color with coplanar vertices will be forced. Find N*.

Graham published a paper in 1971 proving that the answer exists, providing the upper bound \(F^{7}(12)\), where \(F(n) = 2 \uparrow^{n} 3\) in Arrow notation.[2] Sbiis Saibian calls this number "Little Graham". Martin Gardner, when discovering the number's size, found it difficult to explain, and he devised a larger, easier-to-explain number which Graham proved in an unpublished 1977 paper. Martin Gardner wrote about the number in Scientific American and it even made it to Guiness World Records in 1980 as the largest number used in a mathematical proof, although a few years later the title was removed from Guinness World Records.

Tim Chow proved that Graham's number is much larger than the Moser.[6] The proof hinges on the fact that, using Steinhaus-Moser Notation, n in a (k + 2)-gon is less than \(n\underbrace{\uparrow\uparrow\ldots\uparrow\uparrow}_{2k-1}n\). He sent the proof to Susan Stepney on July 7, 1998.[7] Coincidentally, Stepney was sent a similar proof by Todd Cesere several days later.

Japanese googologist Fish proved that Graham's number is less than \(f_{\omega+1}(64)\) in the Fast-growing hierarchy with respect to Wainer hierarchy.[8]

Approximations in other notations

It is natural to ask the maximum of positive integer \(x\) such that the computation above outputs the correct value of \(N(x)\). Since Graham's number can be expressed as 3^^k (k integer), knowing that the congruence speed of 3 is unitary starting from height 2 (see Lemma 1 in NNTDM, 26(3), pp. 246-247), while 3^3 is not congruent to 3 (mod 10), it is possible to state that the abovementioned "wrong algorithm" can only return the last k-1 digits of Graham's number. See the main article on modular exponentiation. 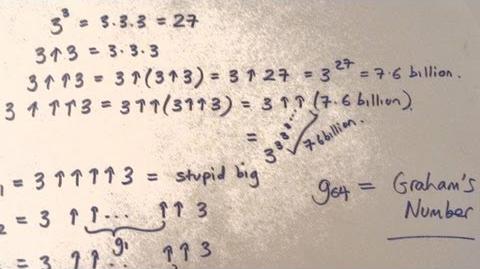