Rayo's number is one of the largest named numbers, coined in a large number battle pitting Agustín Rayo against Adam Elga on 26 January 2007.[1][2][3][4] Rayo's number is, in Rayo's own words, "the smallest positive integer bigger than any finite positive integer named by an expression in the language of first-order set theory with googol symbols or less."

Rayo's function is one of the most fast-growing functions ever to arise in professional mathematics; only a few functions, especially its extension, Fish number 7 surpasses it. Since Rayo's function uses difficult mathematics, there are several trials to generalise it which result in failure. For example, the FOOT (first-order oodle theory) function was also considered to surpass it, but it is ill-defined.

Rayo's function can never be outgrown by a fast-growing hierarchy \(f_\alpha(n)\) for a countable ordinal \(\alpha\) and a fixed system of fundamental sequences for ordinals \(\leq \alpha\) if the hierarchy is defined in \(\textrm{ZFC}\) set theory by the definition of \(\text{Rayo}\).[note 2]

\(\text{Rayo}(n)\), then, is the smallest number greater than all numbers Rayo-nameable in \(n\) symbols.

Note that the x_i's in t(xi) ∈ t(xj) and t(xi) = t(xj) in the definition of \(\text{Sat}\) above were x_1 in the original definition. Although x_1 is the only free variable allowed to occur in a Rayo-name, the variable assignment for x_i is actually referred to in the satisfaction of ∃-fourmulae. Therefore the original definition did not work as Rayo actually intended, and has been updated by Rayo himself.[1](Retrieved 19/05/2020)

Formally adding every set as a constant term symbol, we can canonically extend \(L\) to a formal language \(L'\) with parameters in \(V\). An interpretation of formulae in \(L\) is canonically extended to an interpretation of formulae in \(L'\). A variable assignment is some countably infinite sequence of mathematical objects such as \(A = (3, 2, 6, 1/2, \{4, \pi\}, \omega, 65, \ldots)\). Given a variable assignment, we can convert a formula in \(L'\) into a closed formula in \(L'\) by replacing free occurrences of variable term symbols by the parameter given by the corresponding entry in the variable assignment.

Rayo defined a very specific and abstract formal language together with a canonical choice of an interpretation:

An atomic formula is a special sort of a formula.

Now we arrive at the core concept of Rayo-nameability, ignoring the length restriction:

There is a formula \(\phi\) such that all satisfactory variable assignments must have \(m\) as their first argument, and there is at least one such assignment.

We can continue with this pattern, defining each natural number using this method. It allows us to name the number \(n\) in \(O(n^2)\) symbols. With larger values, it is possible to define recursive operations, allowing us to Rayo-name larger and larger numbers using compact notation. Given a sufficiently large number, a Rayo string that defines exponentiation would need less symbols than our naïve technique.

Note that the symbol xn is counted as a single symbol - it should not be broken into separate symbols x and n.

We have all the pieces in place to define Rayo's function:

Although this argument just gives lower bounds, the precise values for small values are given by Googology Wiki users Plain'N'Simple, Emk, and Ytosk:[5][6][7][8] 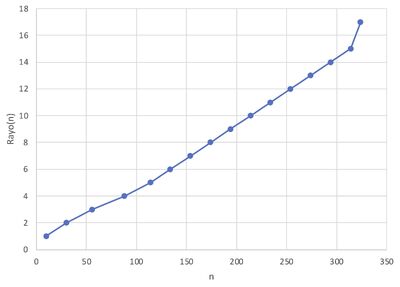 Using these bounds, we can create a graph of the known bounds of Rayo's function, shown to the right. Note that it is a bit inaccurate, since the points should not be connected by a line, but rather the graph should look like somewhat like a floor function.

We will open with Berry's paradox:

The source of the paradox is the ambiguity of the word "definable", and more fundamentally the ambiguity of the English language itself. Rayo's function circumvents these mathematical sins by replacing English with the language called first-order set theory (FOST). FOST is the language of first-order logic with the von Neumann universe as the domain. Specifically, FOST is capable of determining set membership, quantifying over the universe, and applying logical operators. The nitty-gritty details of how this works are given above.

We fix the loophole that causes Berry's paradox, resulting in the following definition of Rayo(n), which is:

The paradox is gone now because the definability has been replaced with a formal language. FOST is subject to Tarski's undefinability theorem, which says we can't formally define truth, let alone definability, so FOST can't invoke FOST the way English can invoke English.

In order to define a natural number using set theory, we need to fix under what axioms we define it. A problem in the definition of Rayo's number is that Rayo did not clarify the axioms. In mathematics, we traditionally omit the declaration of the axioms in which we are working as long as we are working in \(\textrm{ZFC}\) set theory. By the tradition, several googologists think that Rayo's number is defined in \(\textrm{ZFC}\) set theory, or is irrelevant to axioms, but it is wrong.

As Rayo wrote that he uses second-order set theory in order to formalize the primitive semantics vocabulary in the original description, Rayo's number is defined under certain axioms of second-order set theory, which are not clarified. It is important to clarify axioms in uncomputable googology, because uncomputable large numbers can be compared with each other only when they share axioms used in their definitions. Fortunately, there are many choices of axioms of second-order set theory which enable us to define Rayo's number. As a conclusion, Rayo's number is well-defined for googologists who do not care about clarification of axioms and is ill-defined for googologists who care about clarification of axioms. That is why this article belongs to Category:Incomplete.

In 2020, Rayo added the following new description of the way to deal with Rayo's number:[1]

Note: Philosophers sometimes assume a realist interpretation of set-theory. On this interpretation,set-theoretic expressions have "standard" meanings, which determine a definite truth-value for each sentence of the language, regardless of whether it is in principle possible to know what those truth-values are. (See, for instance, this article by Vann McGee.) During the competition, Adam and I took for granted that the language of (second-order) set-theory was interpreted standardly, which guarantees that the final entry corresponds to a definite number. If the language had instead been interpreted on the basis of an axiom system, the final entry would have been invalid. This is because every (consistent) axiomatization of the language has non-isomorphic models and there is no guarantee that the final entry will correspond to the same number with respect to different models.

This means that Rayo considers a philosophical "interpretation" of set theoretic formulae with respect to the "truth" in the real world, which is unformalisable in mathematics, and does not intend a specific choice of axioms. It is one of reasonable directions of googology outside mathematics. On the other hand, the issue in the last sentence looks like an excuse about why they take the unformalisable "truth" for granted, but it does not make sense because the dependency of the value of a given number on a model is irrelevant to the "invalidity". In mathematics, there are many well-defined notions which are not absolute, i.e. depend on a model, e.g. the unique natural number \(n\) satisfying \((\text{CH} \to n=0) \land (\neg \text{CH} \to n=1)\). In googology, there are many large numbers which depend on a model, e.g. values of Busy Beaver function and especially \(S(1919)\), where \(S\) denotes maximum Shift function. In Big Number Duel, there is no rule prohibiting a number which depends on a model, and indeed it even allowed to skip to fix axioms.

When Rayo's number was defined

Rayo and Elga's number duel was inspired by the large number competitions described in the article "Who Can Name the Bigger Number?" by Scott Aaronson.

After Rayo's number was defined

Currently, all the largest named numbers share the same concept of Rayo's function, i.e. referring to the nameability of natural numbers, and all the non-naive extensions such as the FOOT function.

The number was invented by Dr. Agustín Rayo, an Associate Professor (at the time when he created Rayo's number) of Linguistics and Philosophy at the Massachusetts Institute of Technology where he received his Ph.D. in 2001.[19]